Sonoco gifts $25,000 to Coker College in Honor of Louise and Harris DeLoach

Sonoco gifts $25,000 to Coker College in Honor of Louise and Harris DeLoach

Coker College, soon to be Coker University, received a generous gift of $25,000 from Sonoco Products Company in honor of Louise and Harris DeLoach. Mr. DeLoach is retiring from his position as director and executive chairman of Sonoco this month, after a 33-year career in senior management and service with Sonoco, one of the world’s largest diversified global packaging companies. 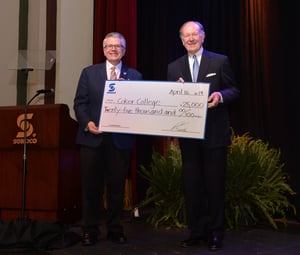 “Louise and Harris, along with Sonoco, have been tremendous advocates for Coker’s educational mission,” said Dr. Robert Wyatt, President of Coker College. “We are fortunate to have people and organizations in our backyard that genuinely value education and the wellbeing of our community. I am truly grateful to the DeLoach family for their support of Coker and Hartsville over the years, and thank Sonoco for choosing the college as a beneficiary for this gift in honor of them. I wish them all the best as Harris embarks on new adventures in his retirement.”

The DeLoaches have long been champions of education in Hartsville and surrounding areas, from higher education to elementary school education. DeLoach, along with support from Sonoco, established the TEACH Foundation, which administers grants that fund the PULSE initiative. Started in 2011, the PULSE initiative supplements the academic learning and personal development of Hartsville school children. PULSE partners include the Darlington County School District, Coker College, the South Carolina Governor's School for Science and Mathematics and Sonoco. "Our desire is to help schools impart academic excellence on our students as they become the workforce of the future,” said DeLoach. “It is absolutely critical to the success of this country and our company that every child, regardless of economic status, leaves the public school system with the skills needed to succeed in the workplace."

DeLoach has had a tremendous impact on Coker College, including serving on its board of trustees from 1976-1980, receiving the Algernon Sydney Sullivan Award in 1985, and an Honorary Doctor of Law degree in 2001. He co-chaired Coker’s ‘Gateway to the New Century Campaign,’ which included building the Charles W. and Joan S. Coker Library-Information Technology Center, renovating key campus buildings, funding academic programs, faculty development, and student scholarships.

The DeLoaches spearheaded fundraising efforts to build Coker’s main athletic complex, the Harris E. and Louise H. DeLoach Center, which opened in 2014. The building serves as a home to Coker’s growing NCAA Division II athletic programs, as well as the campus fitness center, classroom space, and a gathering place for community events. At the groundbreaking ceremony for the center, DeLoach shared, “We are convinced that supporting education in Hartsville is the single, most important thing we can do to ensure the long-term prosperity of our community.”

In addition to serving on the Sonoco board, DeLoach formerly served on the boards of Duke Energy, Milliken & Company, Goodrich Corporation, and Progress Energy. He has also served on numerous non-profit boards and has received several business leadership honors, including Distinguished Alumnus Award from the University of South Carolina’s Moore School of Business in 1998; the University of South Carolina Distinguished Alumni Award in 2006; the 2008 Businessman of the Year by the South Carolina Chamber of Commerce; the Roger Milliken Defender of Manufacturing Award from the South Carolina Manufacturers Alliance in 2014; and the Order of the Palmetto from former South Carolina Gov. Nikki Haley in 2014, which was presented to DeLoach at the grand opening of Coker’s Harris E. and Louise H. DeLoach Center.

About Sonoco
Founded in 1899, Sonoco (NYSE: SON) is a global provider of a variety of consumer packaging, industrial products, protective packaging, and displays and packaging supply chain services. With annualized net sales of approximately $5.4 billion, the Company has 23,000 employees working in approximately 300 operations in 36 countries, serving some of the world’s best known brands in some 85 nations. Sonoco is committed to creating sustainable products, services and programs for our customers, employees and communities that support our corporate purpose of Better Packaging. Better Life. The Company ranked first in the Packaging sector on Fortune’s World’s Most Admired Companies for 2019 as well as Barron’s 100 Most Sustainable Companies. For more information, visit www.sonoco.com.