Coker University's Cecelia Coker Bell Gallery presents Hartsville, South Carolina, artist Jim Boden’s Out of Paradise, an exhibition that begins with a reception at 7pm on Monday, August 26, 2019, and will continue through Friday, September 20, 2019. The opening reception is free, open to the public, and light refreshments will be served. 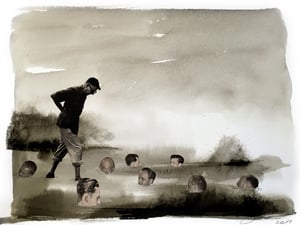 Out of Paradise is an on-going series of paintings and collages. The initiation of the series was based on the existential premise, “What if Adam and Eve chose freely and willingly to leave the Garden, to go adventuring.” Figures are in a landscape in which they may not quite comfortably fit. The “landscapes” serve as theatrical backdrops much like painted backdrops used in old photo studios. The action takes place in this theatrical set and the viewer is catching a moment of the implied narrative.

The series is loosely based on literary structures of journeys––Homer’s Odyssey, James Joyce’s Ulysses, Dante’s Inferno. Also, references are made to T.S. Eliot’s The Waste Land and Ezra Pound’s Cantos; religious and cultural mythologies; Bible, Torah, Qur’an; the Theatre of the Absurd, philosophy. Each image is a moment/event in which the viewer catches a glimpse of action – some are enigmatic, some require the viewer to create the narrative moment, some are of the uncertainty of a moment, some are the moment-before-the-moment. 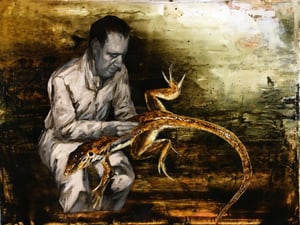 Boden studied fine art at The University of Cincinnati, where he earned his M.F.A. in 1996. Boden has been published in numerous catalogues; most recently, National Small Oil Paintings Exhibition in 2016, and Artfields 2015 and 2016. Boden has also been reviewed by MN artists.org, the Carolina Chronicle, the Hartsville Messenger, and other news outlets. Boden also holds the esteemed title of Professor Emeritus of Art, at Coker University.

For more information about the gallery, please call exhibition director, Renny Prince, at 843-383-8156, or email him at artgallery@coker.edu or visit ceceliacokerbellgallery.com.

The Cecelia Coker Bell Gallery is open 10am to 4pm Monday, Wednesday and Friday, and from 10am to 8pm on Tuesday and Thursday while classes are in session. The Gallery is located in the Gladys C. Fort Art Building on the campus of Coker University in Hartsville, South Carolina. For more on the gallery, please visit www.ceceliacokerbellgallery.com.

Coker College upholds and defends the intellectual and artistic freedom of its faculty and students as they study and create art through which they explore the full spectrum of human experience. The college considers such pursuits central to the spirit of inquiry and thoughtful discussion, which are at the heart of a liberal arts education.