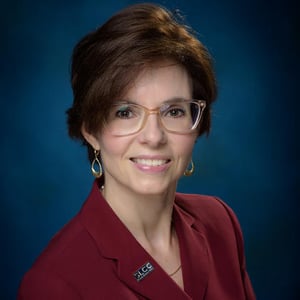 On behalf of Coker University and its Board of Trustees, Angie Stanland, Chairman of the Board, announced today the election of Dr. Natalie Harder as the institution’s 17th president. Dr. Harder, Chancellor of South Louisiana Community College (SLCC), will begin her term as president of Coker University on June 1.

“In Dr. Harder we’ve found a leader who is truly unique in her commitment to expanding student opportunities and student success,” says Stanland. “Her track record is shaped by her expertise in building a culture of excellence and integrity, her emphasis on cross-disciplinary collaboration, and her devotion to developing community engagement. Dr. Harder is a nationally recognized leader in higher education who has demonstrated the type of strong, dynamic, and enlightened leadership that will propel Coker in new directions.”

In the nationwide search, Dr. Harder emerged as the top choice from a diverse pool of more than 100 highly accomplished leaders. Among the finalists, she received the unanimous recommendation of the Presidential Search Committee, which consisted of Coker University trustees, staff, faculty, students, and alumni, and a unanimous vote from the Board of Trustees.

“I am honored and grateful for the opportunity to lead this impressive institution and further its mission to educate the new student majority,” says Dr. Harder. “I hope to build on Coker's many strengths, including its student success initiatives, academic opportunities, and career readiness. Coker’s faculty, staff, board of trustees, alumni, students, and the Hartsville community are great assets. I look forward to honoring Coker’s many traditions while moving the university to new levels of innovation and success.”

Since 2012, Dr. Harder has served as the Chancellor of SLCC, where she was responsible for all academic and operational aspects of the institution. In this role, she built a student-centered culture focused on support, engagement, and retention, expanded the college’s network of community partnerships, and grew enrollment from 6,100 students to over 18,000. Through her leadership, SLCC reached unprecedented success in student outcomes, including increasing the graduation rate five-fold between 2012 and 2017, and doubling the number of degree, diploma, and certificate programs. Dr. Harder also fueled fundraising at SLCC, securing a $12.6 million grant, the largest ever awarded to SLCC, and the development of an institutional advancement and alumni office which resulted in an increase of more than 15 times the number of scholarships awarded to students and the addition of 20 new endowed scholarships.

In addition to leading the growth of SLCC, Dr. Harder has held several state and system-wide responsibilities in Louisiana's community college system, which has 12 institutions serving more than 150,000 students. Most recently, she was Chairman of a statewide student success task force focused on removing barriers to enrollment, redesigning developmental education, and coordinating student services.

Dr. Harder’s contributions have garnered national recognition for SLCC including awards from the National Council for Marketing and Public Relations, the Council for the Advancement and Support of Education, and a nomination for the Aspen Institute’s Aspen Prize for Community College Excellence.

Dr. Harder has served in numerous leadership positions in support of higher education and economic development, including serving on the executive committee for the Southern Association of Colleges and Schools Commission on Colleges (SACSCOC), on the board of directors for the American Association of Community Colleges where she chaired its Public Policy and Government Relations Committee, and as a director on the Louisiana Higher Education Commissioner Task Force for the National Governors Association to increase adult student completion rates. In 2019, she was appointed to the Federal Reserve Bank of Atlanta’s Human Capital Advisory Council and elected Chairman of the Board for One Acadiana, a regional economic development organization where she also serves as co-chair for its Workforce and Education Committee.

Dr. Harder holds a B.A. from the State University of New York at Buffalo, a M.S. from Carnegie Mellon University, and a Ph.D. from Old Dominion University.

Dr. Harder and her husband, Cian Robinson, have two adult sons and will live in Hartsville.